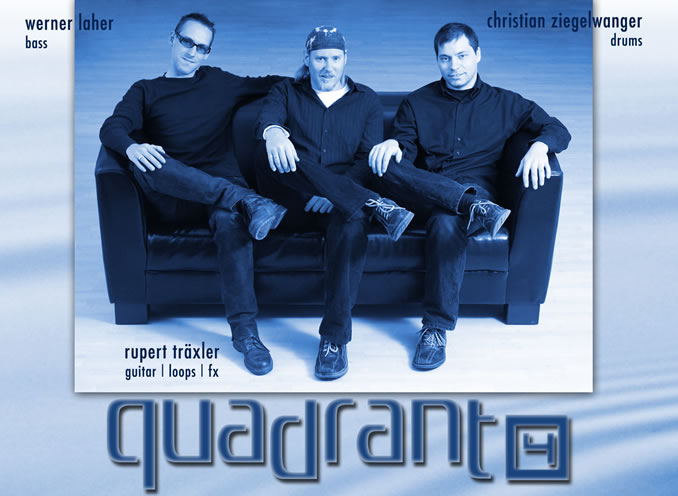 After a two-year maturation period Quadrant4, an extraordinary “infernal trio” of young and creative musicians, continues to play out live with the publication of their debut album “Vortex”. In 1998 the band was founded by Rupert Träxler, who had arrived at a turning point in the course of his musical education, with Edi Koehldorfer.

For Rupert, the Billy Cobham track identically named “Quadrant4” brought about a crucial new access to other dimensions of music, as well as towards making music as such.

From now on the goal was not to contemplate music from a single perspective only, but to change perspectives repeatedly in order to hone the „vision“ across all styles of contemporary musical development. Based on this notion, Quadrant4 deals experimentally with original compositions, which are manifested through versatile solos, the utilization of various technical devices, free arrangements, as well as the creative co-mingling of new elements in different musical styles. The versatile musicians playfully use their musical competence as well as their profound knowledge of music itself.

Through the eclectic combination of new and well-known sounds and styles, new sonic dimensions are generated, which distinguishes Quadrant4 from other groups. Quadrant4 convinces the audience not only with their own compositions assigned to contemporary jazz/fusion/rock, but also with the versatile realization of tunes by their idols and colleagues.

These three talented musicians incite the audience with their love of musicaln details, which sets a new benchmark in the domestic music-scene.